I could not resist the word play.   I have the greatest respect for the courts of Great Britain and no slur is meant.  I don’t think they are going to the dogs.   If you’d like to read about my background research you can read the post Inspiration from the English Courts 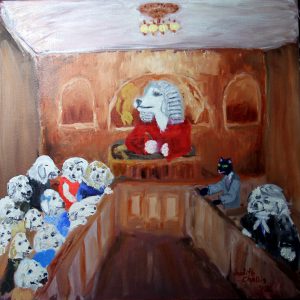 News update:   My Muse Calls and A Jury of Your Pyrs has been blogged about on Law Actually!

Dan and I honeymooned in Malta.  It’s a wonderful island country in the Mediterranean with a rich history that my history buff husband loved.  It also had a neolithic cult where they had many statues and temples to ..I have to say..fat women…hugely obese richly voluptuous women. Goddesses of fertility it is proposed.  It’s no secret that I’ve never been twiggy and don’t want to be.  So being on an island where they once worshiped women of my proportion and larger (I say bring back the cult) was really up my alley too.  That women could be worshiped for all they were mentally, physically, spiritually appeals to me, rather than how advertising approves women on a basis of lack of bodily mass.  Both various sites and the Maltese museum have images of this goddess.  Some believe it was part of a cult of those who worshipped Astarte.  Of all of the images, my favorite is the sleeping goddess seen below.

The light in Malta is wonderful and many companies go there to film.  There is a blue that I call “Maltese blue” that inhabits their ocean coves that I have seen no where else.

As we toured Malta we passed this cat, more than once.

He sat in front of a store that had a wonderful entrance including a sparkly piece of granite embedded into the sidewalk.  The cat sat on this granite basking in the sun.  It was clear from his demeanor that we tourists were only allowed on the island because he granted his most gracious permission.  This cat had cattitude!    I nicknamed him the Mayor of Malta,  I tried to capture his cattitude in this oil painting.