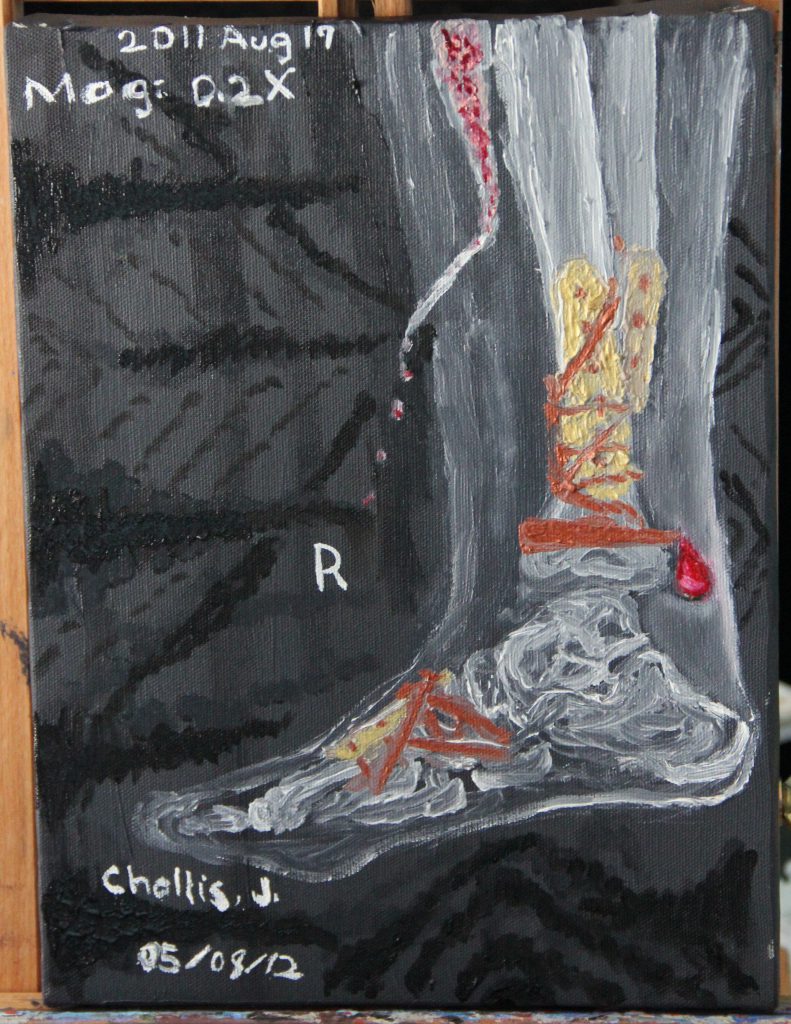 I started painting after a car came into my lane and caused severe injuries to my leg.  I couldn’t walk for over a year and spent most of that time in a wheelchair.  Of course, as my job was a field job, that was quickly lost.  So I started to paint.

I’m in good company when it comes to making art after being in some way injured.   Let’s look at Van Gogh, during a fit of anxiety, he cut of his ear and did a self-portrait.  He died at the age of 37 from what is believed to be a self-inflicted gunshot wound.  Have no fear, I am both older than 37 and have no plans of leaving this earth.

Henri Toulouse Lautrec broke his right leg at age 12 and his left leg at age 14.  The bones never healed properly and he never reached full height and he could never quite move properly.  He threw himself into his art and created such wonderful works such as At the Moulin Rouge and his famous posters of can-can girls from that era.

Frida Kahlo contracted polio at a young age.  Perhaps that was what inspired her to desire to study to become a doctor.  But at age 18 she was in a tragic bus accident. She too, threw herself into her art.  Untrained, except for books and contacts with other painters, she produced some of Mexico’s most well known art.  A self portrait, known as Between the Curtains was dedicated to Leon Trosky.  She had an interesting political life as well as an artistic one.

Well Van Gogh had his ear and I had my leg.  So I decided to turn into art the thing that got me started painting and modeled the painting after my x-ray.  The painting is titled 08 17 2011 the date of my surgery after my accident, where over 60 pieces of metal were installed to rebuild/help nail and screw my bones back together.  Somehow, painting this was healing.  Rather than something that just happened to me, it is a mark of transition in my life.  And now hopefully I can close that chapter and move on, more slowly and less able than in the past, but still move on.